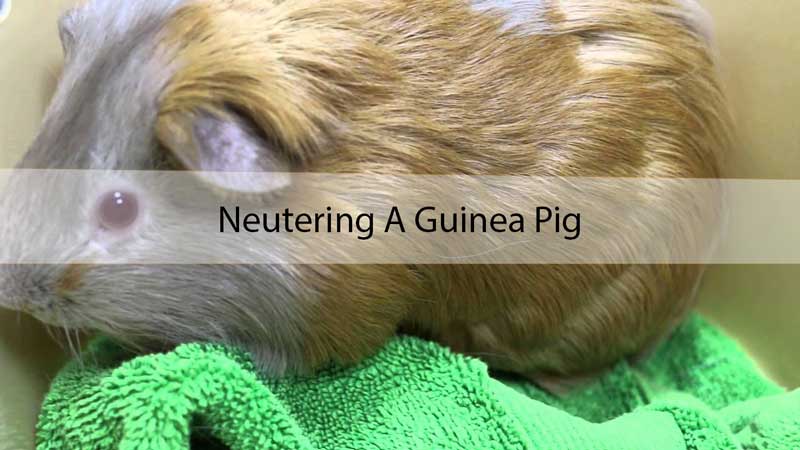 Guinea pigs are originated from Andes of South America. They are not descendants of pigs, nor they have they originated from Guinea. The name could be misleading. It is a very small pet which can be carried easily. They are widely popular as test subjects for science experiments.

Usually, when one decides to bring in a pet, he has some prior planning and arrangements made for the new addition to the family. The planning might get ruined if the number of pets exceeds his expectation. Thus, it is vital to control the population of pets in your home.

If you have one guinea pig, then this is not a problem for you. The problem will arise once you have more than one guinea pig. Neuter or castration is the procedure by which a domesticated animal's reproduction system is made ineffective.

Why Should You Neuter Your Guinea Pig?

Neutering is one of the best solutions to deactivate the sexuality of your guinea pigs. It will also help if your male guinea pigs are not bonding together.

There is speculation that neutering helps male guinea pigs to change its attitude and find interest in other guinea pigs regardless of their gender.

Steps To Neuter A Guinea Pig:

The Risks Associated with Neutering

Neutering or castrating is not an entirely safe operation. It is considered very dangerous. The immune system of the pet will get weaker after the surgery. There is also a possibility of exposure to infection.

Age is an essential factor in decision making. You should not go for surgery if your guinea pig is less than 3-4 years.

There can be some basic preparations you can have before neutering a guinea pig. Once you decide to do so, you might face problems which you might not be prepared for. The most basic preparation you can take is expanding your level of patience. It is important not only with guinea pigs but with any other pet.