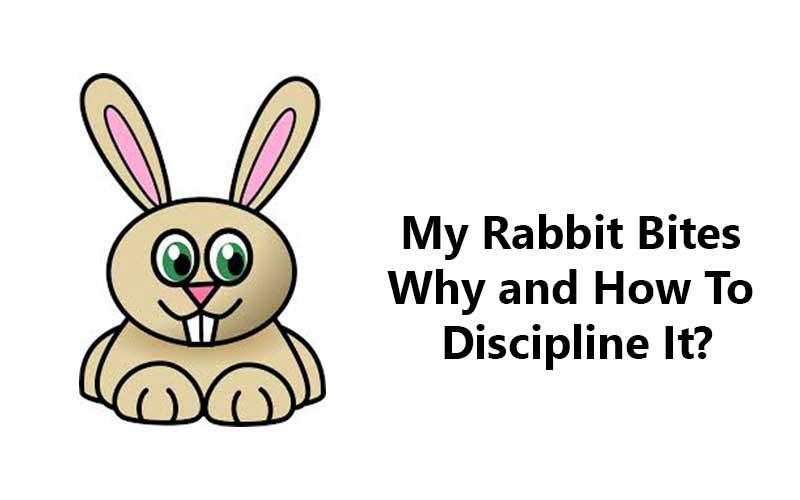 My Rabbit Bites – Why and How To Discipline It?

As you snuggle and play with your bunny, you may notice some signs of them being agitated. The feelings of discomfort may be due to its surrounding, or your treatment as an owner.

Normally, rabbits are known to be affectionate, thumping to get attention, but their body language always expresses if they feel displeasure or scared.

Nevertheless, if they hurt you, there is a reason behind it. Though sometimes, the movements are mistaken, and what appears to be biting is just the affectionate way of saying "pet me."

The furry little bunnies have feelings, and so you need to be careful on how you treat it. Here is some information that you need to know about what to do on some of the negative circumstances and how to avoid it.

Rabbits can live in the wild and therefore has the potential to protect one's self. One of their defense mechanisms is biting. They are prey animals, and although unexpected, can perform the act of biting with their big incisors if they decided that you deserve it.

People are often astonished and mystified on this occurrence. Those little furry animals may seem harmless and unable to hurt you, but they can.

If this happens, make sure to find out the reason why. Often, they feel unsafe which causes them to need to protect themselves. Show them that you are harmless, and so is their surroundings.

Why Do Bunnies & Rabbits Bite?

A well-loved bunny doesn’t bite out of spite. They do not typically hurt their owner just for fun. It is mostly done because they feel threatened regarding their surroundings. Here are some of the instances that you should avoid to not witness an aggressive bunny;

Bunnies, although adorable, can be mad. This sign includes grunting, scratching, or in worst cases, bite. They are known to be territorial, specifically protect their belongings such as toys, bedding, and even their food supplies.

In this case, it is much better to let them roam around the house while you clean or redecorate their housing.

When the rabbit reaches adulthood, they are often aggressive due to their raging hormones. Neutering or castrating your rabbit can stop this phenomenon, aside from allowing them to have a long life. It alleviates their bad behaviors, and be the bunny companion that you want to have!

Sometimes, they nip your skin just to get your attention. This means that they are bored and that they want to play or cuddle with you. It may seem bittersweet, but the painful bite implies that they want some affection.

If you're going to stop this movement, consider extending your playtime or adopt another bunny so that they will have a playmate!

Being the prey animals that they are, they don't feel safe being held. If you handle it somewhere it doesn't like, the possibility of being bitten increases.

Some of these parts include their tails, underside of their chins, feet, ear, and bellies. Though, it still depends on the preference of your bunny, as some likes being stroked, or receive an occasional gentle ear massage.

Teach your bunny to trust you. Don’t pressure nor push it to do certain things it doesn’t want to. Learn to be patient, as you watch the little creature slowly gets fond of you. If you own any other pet animals, ensure that they are harmless, or better yet, not let them near your bunny.

See Also: Rabbit Hutch Plans – How To Build On Your Own For Outside

How to Discipline A Rabbit?

Since bunnies are sensitive, it is hard to discipline them. If you seem angry, they will most likely be afraid and broken, which causes them to hide and lose their trust in you.

If you are too lenient, they will happily skip and do the unwanted action again. In line with this, here is the guide to help you set the wanted boundaries without hurting your rabbit;

Pay attention to them carefully. If you looked elsewhere even with just a split second, you may look back and saw the unwanted action already done.

In this case, there is no use in disciplining your bunny if its attention is already diverted. This can just confuse your little bunny, as it cannot recall what had happened.

2. The Act Of Discipline Should Not Be Masked With Punishment

Rabbits are fragile creatures. It is not advisable to hit them, for they will only lose their trust and fear you. When you do catch them in the act, just give them a clear instruction in a firm manner that what they have done is inappropriate, or just shake a rattle and say “No”.  You can get their attention by using water mister, rattling sounds, or voice commands.

You are aiming to discourage the unwanted behavior, not to break them. Make sure that the act of discipline is not aggressive, and that they should still live a comfortable life.

Sometimes, they have wild instincts that are natural, since they are just animals. It is best to make compromises and to have patience in taking care of them.

See Also: 15 Pet Rabbit Facts You Will Find Interesting To Know About

What to Do If A Rabbit Bites You?

You are playing with your bunny, and then suddenly, it bites you. What to do next? Should you ignore the act and still cuddle with your rabbit?

Here are the steps on what to do when your furry creature bites;

Emit a hit pitch squeal to let them know that you are hurt. It would work on some cases, especially if it didn't intend to harm you. Though, if the rabbit seems pleased, then you can assume that you have wronged them.

Figure Out Why It Bites You

Did you snuggle it and it didn’t like that spot? Are you attempting to get its food bowl? Did you scare it? Does it simply want attention? Recall the instance and learn from it.

NEVER hit your rabbit or throw it on the other side of the room. Being aggressive can make you their enemy, instead of a companion. In this time, just call for a time out in your playtime adventure. This may calm your rabbit, and your senses too.

Make sure to do this to get rid of any potential infections. The rabbit didn't win this battle as you can still play with them; just lessen the interaction time physically in this period.

Don’t Do It Again, Make Amends, And Compromise

As you've learned the reason, avoid doing it again. A rabbit-human relation often breaks when they mostly fight, and so, turn the other cheek. Make amends with your little creature, and spend time with them in a positive way.

Always consider rabbits as fragile animals, as they tend to be easily frightened and afraid. To avoid the miscommunication, it is best to discipline them wearing the calmest expression that you can ever behold.

Remember that being adorable does not guarantee them the free pass to be the naughty little creatures. As an owner, you are obliged to discipline them whenever they have wronged you. Now, apply the corrections and teach your rabbit the right way!

Hedgehog Quilling: When and How Often They Do It?

Rabbit Litter Box: How To Potty Train A Bunny?

Rabbit Toys and Supplies – What Do You Need For a Bunny?

Rabbit Cage Floor Covering – Everything You Need to Know

Rabbit Diet – What They Can and Can’t Eat?

How to Tell the Gender of a Rabbit?
Rabbit Litter Box: How To Potty Train A Bunny?
Rabbit Toys and Supplies – What Do You Need For a Bunny?
Rabbit Cage Floor Covering – Everything You Need to Know
Rabbit Diet – What They Can and Can’t Eat?