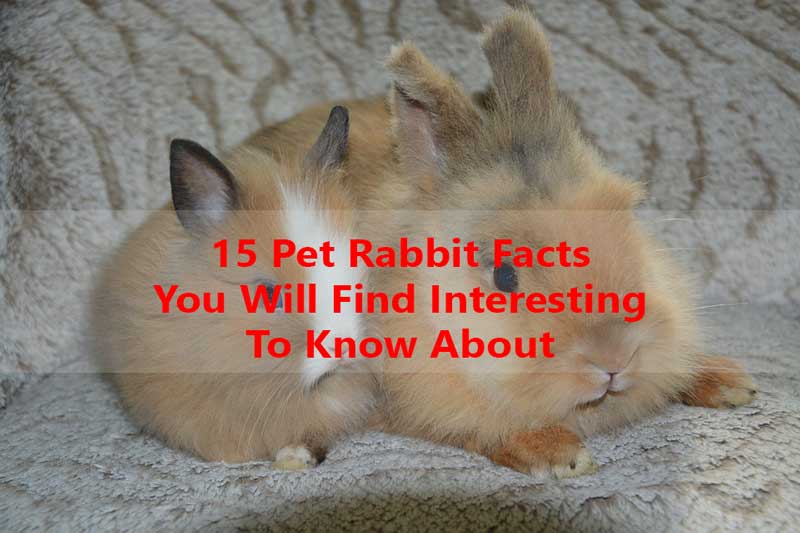 15 Pet Rabbit Facts You Will Find Interesting To Know About

As you adopt the fuzzy little creatures and welcome them in your home, there are some actions that they can do which can confuse you. They are one of the world's most preferred pets but are also often misunderstood.

They can surprise you in their little flurry way but still acts as an innocent little animal that doesn't have a clue in its surrounding. To know more about their ambiguous lifestyle, here are some of the rabbit myths that are worth the knowledge!

You cannot have the best of both worlds, for a reason that the two animals must always be apart at all times.

They are both similar in size and adorable, but they often fight. They are not a perfect match due to the different method of communication used, which means that they can’t understand each other.

2. The Cartoons Are Wrong About The Carrot

Rabbits don’t naturally eat root vegetables, as they are high in sugar. It can only be fed occasionally, and excess amount may lead to serious health problems. Instead, they mostly eat hay or leafy greens.

The next time you watch another cartoon about rabbits, now you know that it is not factually correct!

See Also: How Many Times a Day Should I Feed My Rabbit

3. Their Communication Is Often Secretive

It is not a secret, but their movements are known to be too subtle. You can only understand them if you give them the time of day and watch how they change moods or position.

A thumping bunny is an attention-seeker little creature, while the changing of position is mostly done when they are scared. If you want to understand them, play with them more often, and they will slowly grow fond of you.

4. Rabbits Can Turn Their Ear 180 Degrees

You can say that they have superpowers due to their strong sense of hearing. Specifically, they can pinpoint the exact location of the sound.

This is useful if there are predators around, waiting for their chance to harm the little creatures.

5. The Bunnies Are Crepuscular

Most people mistake rabbits as nocturnal, but that is not the case. Instead, they are most active at twilight, specifically dawn or sunset, rather than night.

6. When Happy, They Purr

7. The Fuzzy Creatures Are Territorial

Do not touch their belongings when they are around, for they will most likely treat you as their enemy. Rabbits rule their den and decide where they prefer to sleep, eat, or defecate.

If your bunny is not neutered and is slowly advancing to adulthood, consider in doing so if you don't want to smell their pee everywhere!

8. Cuddles Is A Must For Baby Bunnies!

Newborn babies are born without a fur in their bodies, and so they need cuddles to keep them warm.

Not only do they need extra love, but they also need to snuggle up to their parents to survive. It is the most endearing scene one can ever see in their natural habitat!

9. Mummy Rabbits Make The Nest For Their Bunnies

An expectant mummy rabbit often prepares a nest for their little one-to-be. For the forthcoming additions of the family, she will pluck some of her furs to make bedding. As they don’t have any fur, this would keep them warm. Now that is the sacrifice!

10. A Bored Bunny Is A Lonely Bunny

Rabbits need interaction and socialization in their lifetime, and these include toys to keep them company.

Their playtime is the cutest thing ever! As they hop around, roll and chew to their heart's content. Also, consider adopting another rabbit, double the bunny means double the fun.

11. Their Eyesight Is Better Than Most Humans

Rabbits are known to have vision scope of 360 degrees, which helps them to see and be aware of possible predators in the surrounding.

As they grow older, they can see the world and things that you can never see nor notice. Not only do they have hearing powers, but also a "see all" ability.

When your fuzzy creature is excited, they do the act of "jumping for joy." This movement is mostly called binky, and it shows the characteristic of a happy bunny. Seeing it can make your heart leap due to their extreme cuteness.

Don’t we all have a big appetite? Though, in their case, rabbits prefer hay. They crave for it a lot, which is why their cage needs an unlimited supply of hay all day.

It makes their tummies healthy, and also improves their mood. Besides, who are we to complain as we watch the furry creatures nibble with their little teeth?

See Also: Rabbit Diet – What They Can and Can’t Eat?

14. The Nail And Teeth Grow Continuously

Since their nails continually grow, it is a must to trim it, specifically every six weeks. Though, the most astonishing part is that their teeth continuously grow too!

This is why a rabbit needs to chew every once in a while, with an abundant supply of hay and toys to choose from. Failure to do so may find their way of eating painful in the long run, which causes them to starve themselves.

Rabbits are hygienic, and so they groom themselves much to their delight. Though, unlike cats, they cannot cough up and produce a hairball after this movement.

Instead, they swallow the fur since their digestive tract is incapable of spitting, nor producing hairballs. They deal with it by eating and pushing it down their system.

Rabbits are more than just pet animals, for they have unique characteristics in them. All you have to do is pay attention to them closely, and watch their little movements to create an understanding.

Adopting a rabbit is a lifetime commitment, and in line with this, accept their behavior and adjust from it. Do you think you have what it takes to be the rabbit’s companion? What are you waiting for? Adopt a bunny now!

How to Cut Rabbit Nails?