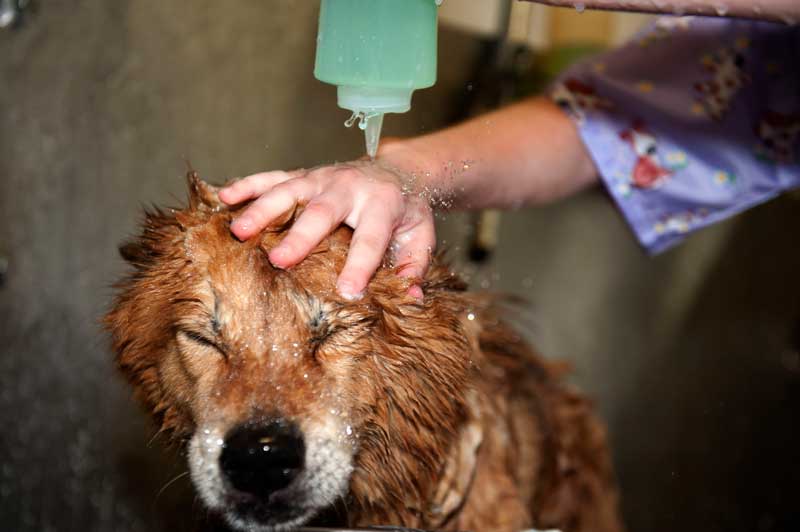 Dandruff in the shoulder is quite embarrassing for people. And this is also a reality for dogs, even though they don’t feel embarrassed. Unlike humans, they are not bothered about the flakes until excessive dandruff comes along with sever itching and redness in the skin of the dogs that makes them restless.

And you shouldn’t stay in peace if your beautiful pooch is feeling uncomfortable.

Though the formation of dandruff is not a serious issue, it is essential to know the reasons behind the excess of it. This way you can keep your dog free from dandruff and itching – and have peace of mind when it happens.

Here we are going to talk about these reasons and a little more about dandruff. Come and see!

It is very normal that some dead skin cells shed from the body as flakes start falling from the dog’s fur. But when this shedding becomes excessive, it usually comes with redness and itching.

This large amount of shedding can commonly be referred to as dandruff whose scientific name is seborrhea. Dandruff in human beings is quite embarrassing, but dogs don't care much about it. However, dandruff can be bothersome for dogs when it starts to itch.

This occurs because of a disorder of sebaceous gland which is responsible for producing oils and sebum to lubricate the skin and hair of the animal. But seborrhea produces sebum in massive amounts, which eventually causes dandruff.

There are two forms of dandruff in dogs. One is oily while the other one is dry. But many dogs with dandruff have a combination of these two forms.

Random flakes in the body or hair of dogs are typical and not a matter of concern. When dogs are in the hospital, or they are stressed, it is common to notice flaky skin and this little amount of flakes that are typical among most dogs.

But the thing we need to know is when dandruff becomes a problem for the dog, and it starts being vital to treat. So, let’s see the symptoms of seborrhea:

There are few causes behind the formation of dandruff in dogs. These reasons are:

Dandruff can occur in the fur and hair of dogs due to different parasites, bacteria, fungi, and other microorganisms. These organisms can make the skin dry and form a large number of dead cells that are seen in the form of dander.

If the phrase mangy mutt comes to mind while examining the dog's dandruff, then it is due to the formation of dandruff by parasites attack and mange.

Not all dogs are similar. Some are more affected by the weather than others. The ones that don’t fare well in challenging climates may eventually grow dandruff.

It is already known to everyone that in winter the humidity decreases significantly for which moisture decreases in the air. This makes the skin of dogs dry as well as flaky, creating dandruff.

Your dog can suffer from this even in the summer and the spring if your dogs have problems of skin allergies.

All dogs have some types of bacteria, as well as yeast, in the skin that are beneficial for them. But when the number of these bacteria and yeast increases significantly, they start creating different skin problems, and dandruff is one of them.

Except for the beneficial bacteria and yeast, the presence of some harmful bacteria can cause dandruff. Ringworm is such an example of a fungus that can cause infection which ultimately leads to the formation of dandruff.

To stay fit and healthy, every living being should eat nutritious food. Dogs are not an exception. If your dog has a diet that lacks omega-3 fatty acid, this could lead to skin abnormalities among which you can find dandruff.

Dandruff can be of two types: primary and secondary. The primary is dandruff is the one that is obtained by an inherited condition. Even after keeping your dogs clean and highly maintained it would be quite tricky to get rid of primary dandruff.

This happens for variations in genes, brought from the parents most of the time.

Though the dogs can’t express their feelings through the mouth, it is evident that like human beings they also want to get rid of dandruff when it causes itching. This may bother them a lot and make them restless, even making them downright uncomfortable.

So it is wise to take the matter seriously and take the following steps to treat, prevent or reduce the dandruff of your dog's hair, skin, and fur.

Home remedies are always preferable rather than using chemicals on the skin. There are simple and natural home remedies that one can use to treat dandruff of dogs with some ingredients that are always in the reach of our hands.

Dandruff is not a severe issue but should not be kept untreated as the formation of excessive dandruff can be a symptom of a disease like Cushing's disease.

It is required to get into the root of this problem and take precautions against the causes of formation of dandruff, so your dogs stay in peace and do not have to bother the pain of severe itching ensuring proper grooming, shower, adequate diet, control of humidity, etc.

How To Make A Paracord Dog Leash?

Why is My Dog Panting So Much?
How To Stop Neighbor Dog From Barking And Out Of Your Yard?
How To Train A Pitbull Puppy?
How To Get Your Dog To Drink Water?
How Long Can A Dog Live With Different Diseases?