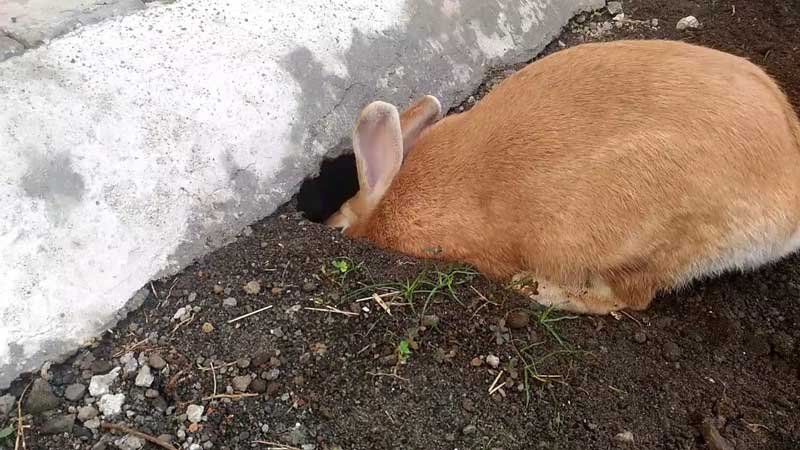 Rabbit Hole – How Deep Does It Go Actually?

We are introduced with a rabbit's burrow in the illusion of our childhood. In one of the classic film adaptations entitled "Alice and the wonderland," the bunny's holes are used as an entrance or portal for a new scenery or event. It is also often masked with metaphors such as entering a new world or entering a complex journey.

In reality, it is nothing but a hole in the ground. We may see it in our backyard, and wonder how it is dug and how deep it is. Some are often agitated as it ruins the freshly cut grass, while others are just plain curious about its purpose. In this text, you will be informed about the conundrum appearances of rabbit holes and its use.

What Is A Rabbit Hole?

Whenever you see a burrow in the ground, you are witnessing the fine work of a fuzzy little creature. Though not all rabbits are keen in digging holes, many of them still embrace this behavior.

These holes give us a sign that they are somewhere near our premises. They create a burrow using their sturdy paws, but what is the use of it? 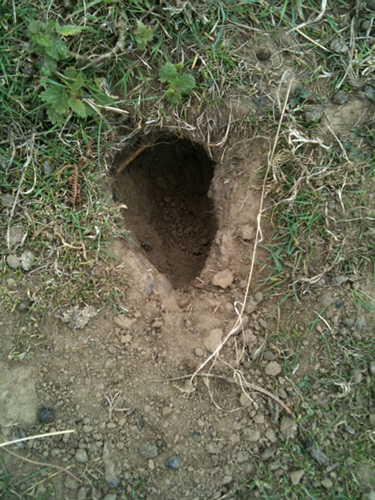 See Also: How To Play With a Rabbit?

Rabbits are known to value privacy, which is why they make holes as a form of shelter. It is a natural movement from them, and the dug holes would, later on, be used as their resting place, especially for sleeping.

The burrow serves as their haven, and so they would not go too far away from it.They only exit their cozy shelter to look for potential foods. If they sense a predator within their radar, they will retreat to their burrow until the open area is cleared.

Rabbits are known to sense the little movements surrounding them and can detect their predators just in time to hide. Some of their enemies include hunters, cats, foxes, and weasels.

Aside from their circumstances, the most adorable thing that you can ever see in a rabbit’s burrow is when the mother gives birth to their offspring inside it. Since it is a safe spot for them, it is used as a den to create their new family. With all of this said, the essentiality of a burrow can be seen in their lifetime, as it provides shelter, safety, and physical comfort.

The Deepness of a Burrow

Not all rabbit burrows are the same - they differ in depth, circumference and size depending on some external factors, specifically:

The easier it is to dig the soil, the deeper the burrow is. The length of time can also be taken into consideration, as its existence and establishment depend on the rabbit's growing family.

In the area, the depth also depends on the water level. The bunnies take into account the water level, as the average depth is dependent on such extreme conditions.

Moreover, since rabbits are social creatures, most of them construct their burrows in a cluster. The holes are known as tunnels that go into several directions which are often called "warrens."

With all of this said, it is tough to distinguish the average deepness of a burrow, for there is none. The rabbit's eagerness to dig a hole depends on the stated factors, and their need to feel secure.

Though, if you need the bunny to not go out or in within your premises, it is advisable to have a fence that is buried 6 to 10 inches in the ground, and a few inches should be laterally buried to avoid the little creatures from digging beneath it.

How to Avoid the Holes in Your Premises?

A rabbit is a delicate little creature, but sometimes, it causes damage in your garden. It would most likely nibble on the newly emerging plants that you have taken care of for the past years. Since they are quite the nuisance in this case, here are the guidelines to get rid of the rabbits in your yard.

They are difficult to actively observe, but you can see them even in the morning. Look out for rabbit droppings that have the same size like that of a pea, and is scattered everywhere.

Also, carefully inspect your plant, and see if there are stalks or leaves that have been fallen off. The leaf would appear to have a clean cut because of the rabbit’s sharp teeth.

Mow the tall grasses in your garden, block the entrance under some of the little structures in your house, and keep the pile of leaves in an ordered manner.

These are potential sight that can be used as a hideout from predators, and would most likely invite the fuzzy creatures in your yard. Also, plant some of those that the rabbit would never eat. This includes Marigold, Mexican sunflower, vinca, and cardinal flower.

Apply Barriers Near Your Plants

Add a fence around your garden. It should be buried with at least six feet or more since rabbits are known to be quite a digger. Also allow extra height to the fence, with at least three feet for added support. If you want, you can also install electric fencing.

Adopt A Dog And Keep It Outside

Rabbits are easily afraid, which means that a dog’s presence would most likely scare them away.

You can easily protect your yard by spraying it all around the premises. Spraying your plants would make it less appealing to rabbits, and therefore move to another location for the potential shelter.

You see a hole within your premises, but you are not sure if it is a rabbit's burrow. What would you do? Here are some signs to look out for;

Check If The Residence Is Occupied Or Not

If the hole is filled with dead leaves and plants, then the burrow is already abandoned. Pay attention and see if the leaves are kicked clear, if yes, then it is more likely to contain bunnies. You can also check if it is an entrance or an exit depending on the plant’s direction.

Look Out For Loose Soil

Checking the loose soil will give you a gist or clue regarding the deepness of the burrow and how long ago it was dug.

If the path of the hole looks flat, then it is a ‘bolt hole.' These are often smaller and well-hidden. Look for it in the middle of brambles, for they know that it is not noticeable and therefore much safer to use.

Rabbit holes are used as a shelter, and as a shield of protection away from predators. This is where the little creatures build up their family as it ensures a cozy little spot for them.

Without this, the rabbits are exposed and have nowhere to hide from. Though, if it is a nuisance for your garden, make sure to apply the suggested movements for the fuzzy bunnies to know that they are not welcome there.

Have you seen a hole in the ground? Be careful! For a little fuzzy creature might be living in there.