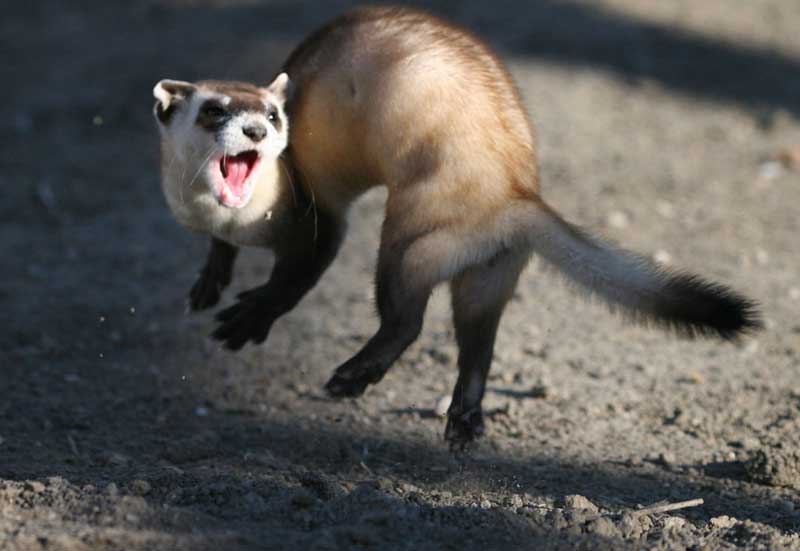 Ferret Sounds and What They Mean Actually?

Ferrets are a cute little creature to pet. And what’s more interesting, they can communicate with some very unique noises.

Now, some ferrets live their whole lives making only really a few noises, but mostly, ferrets are really vocal. Let’s take a look at some of their noises and what they mean.

Dook, in short, is a ferret smile. It even sounds closely like a chuckle. A ferret starts dooking when it feels playful. If your ferret is around you and it starts dooking, that means now its playtime.

Dooking can be easily understood by the ear if it is compared to the clucking of a chicken. A ferret usually jumps up and down and acts really excited while dooking as well. So, maybe the gesture in itself is pretty self-explaining as well.

Dooking is on top of our list because almost all ferrets dook from time to time. But it is understandable if a ferret likes to keep itself silent and does not dook that often. It doesn’t necessarily mean it’s not a happy ferret, of course.

The hiss of the ferret is well known among people. It’s a low sound, and it almost sounds like when a human goes “heh." It can also be compared to the sound of a cat hissing, but, definitely, the one made by the cat is creepier and more screechy.

By the sound of it, you can understand it’s not a happy sound. Ferrets hiss to mostly show anger, but they also tend to express fear with it. But researchers confirmed that ferrets tend to also hiss when they are playfully fighting with their mates as well.

If a ferret shows discomfort by hissing, it is better to first tend to the ferret softly and assure it and then leave it alone for some time. They will reduce whatever it is that was disturbing enough themselves. A little too much care might act negatively on the ferret then.

Squeak is made by the ferrets who wants to make their mates feel the owner of them during, well, gameplay. The also start squeaking when the game is taken to a stretch, and it’s become too much for them.

During ferret squeak, it is better to not pay too much attention at first. Because it can very easily be a playful noise. But, if a ferret starts squeaking too much, it is better to separate the ferrets for some time, before they start canoodling again.

Squeaking sounds similar to dooking, but well, you can tell when a ferret is squeaking.

No, ferrets are not dogs, nor they bark like one. It mostly sounds like a loud chirping; it can be compared to the low growl of a dog.

It is a debate among researchers when ferrets actually start barking. Because ferrets bark in very contradicting manner.Sometimes, ferrets bark when they are extremely happy and pleasured with something.

Other times, ferrets tend to bark to express how terrified they are. So, let’s just say ferrets bark whenever they feel an extreme sort of emotion, and the surrounding will help us understand the rest.

It is better to leave a ferret alone and be on its own when it’s barking, unless it’s terrified and in danger, of course. The barking of a ferret is generally really cute to look at and listen to, a bliss to the owner, some may say. But sadly, ferrets don’t bark that often.

Oh, that is not a happy sound, Ferrets screech to the top of their lungs to express pain or anger. If it is in pain and danger, you should assist him immediately.

Screech is ferret scream. It is accompanied by a loud chatter as well. This is a noise that should be taken extremely seriously, and you're a little late may result in fatal consequences as well.

Let’s hope we never come across the sound of screeching. But, if an angry ferret screeches, it is imperative to calm it down. Ferrets are usually not hostile, but necessary precautions still should be kept for emergencies like this.

Ferrets tend to squeal when they are excited. It just means they want some attention and they want to be played with.

Some ferrets squeal even in their sleep. Research states that ferrets tend to dream like a human in their sleep. The squealing may be a result of a bad dream or a nightmare. Squealing is not a concerning sound and shouldn’t be misconstrued as screeching.

Ferrets have a tendency of taking a sniff of everything they come across. And it results in sneezing from time to time. Ferrets sneeze in the cutest and ridiculous way.

Sneezing is quite common in ferrets and should not be of any concern. But, if regular sneezing is accompanied by a runny nose or discharges around the eye, that means your ferret caught a cold. You should definitely take it to a vet then.

Sometimes ferrets whimper only because they crave for attention. Even though whimpering is not a happy sound, maybe the ferret needs your care and wants to play with you. Do not disappoint your ferret then.

Keeping them longer in the ferret cage is a big NO.

Whining is almost a similar sound as a whimper, but it indicates to illness or pain. Mostly baby ferrets make this noise when they are crying for their mother.

You need to understand the whine of a ferret and attend to it. If it is upset, you should take care of your pet.

Ferrets mostly honk when they are nervous. Honking is not seen in adult ferrets, but it is a common sound baby ferrets make. It means they are looking for something but unable to find it. Ferrets start honking when they lose the direction as well.

Whatever it is, a cough means it’s time to go to a vet, and a second one refers to the fact that you’re already late!

Yes, unbelievable as it sounds, ferrets snore just like a human. Of course, not all ferrets do, but the ones that do make it look really cute. Ferret snoring should not be taken as a concern. It is only to look at and giggle about.

Ferrets tend to grind their teeth in pain and start making clattering noises using their teeth as well. This is something we need to take seriously and contact a vet for any signs of physical discomforts.

Ferrets always communicate effectively using different kinds of noises. They are a very vocal animal. It is upon us to understand their need and cater to them that way. Be a responsible owner; know your ferret’s noises!

Here you go. Now, when your ferret makes a noise, you’ll know what he exactly means. Having difficulties to remember all the sounds and their meanings?

Well, you can save the post, and every time your ferret makes an unfamiliar noise, you can look it up on the internet. Nevertheless, I hope you won’t have any problem understanding your pet from now on.

How to Get Rid of Ferret Odor in Room?

How to Bath and Clean a Ferret? Quick Guide

How to Ferret-Proof a Bedroom? Beginners Guide

How to Litter Train a Ferret? Beginners Guide

How To Make A Ferret Hammock: A Step By Step Guide For Newbies

How to Play with A Ferret To Make It Happy?

How to Take Care of a Ferret? It’s Actually Easy