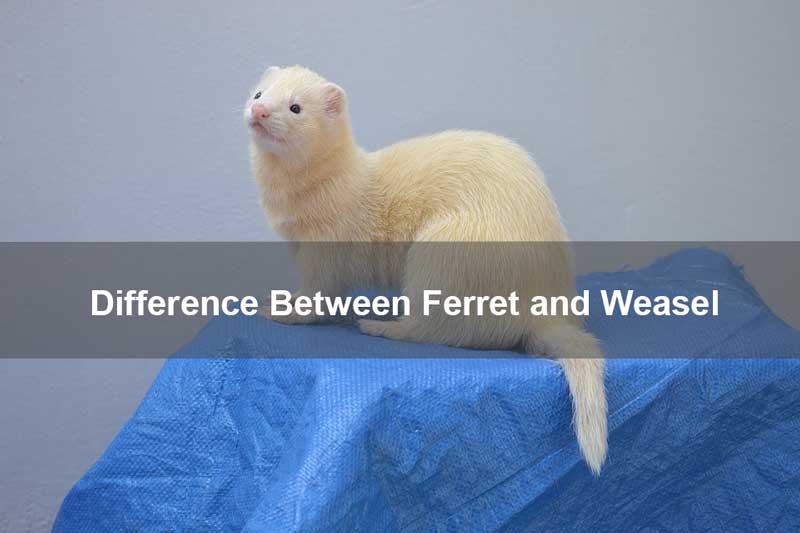 Main Difference Between A Ferret and A Weasel?

Weasel and a ferret may look similar if not looked closely. As a result, people often get confused between these two animals. Actually, they are from two different species but comes from the same scientific family of Mustelidae.

Despite the fact that they belong to the same family, certain things differentiate them in different aspects. Both the animals are swift with a long tubular body, but their hunting habits and appetites are anything but same.

So, I am here to tell you how to differentiate these two distant cousins of the Mustelidae family in this article.

What Is A Weasel? 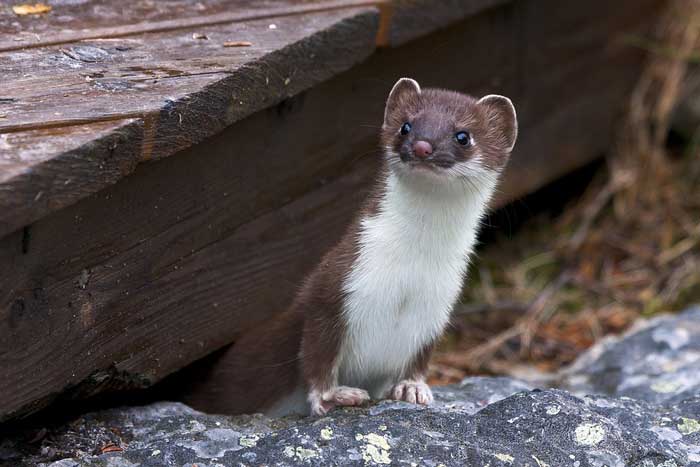 Weasels are small mammals with long bodies and short legs. They come from genus Mustela of the Mustelidae family. There are 17 species under genus Mustela, and weasels belong to ten of them.

Generally, they can be black or brown mixed with white or cream. They are also known as the smallest carnivore of the world as they feed on only meat. They are very adaptable and found all over the world commonly in North America.

Different types of weasels can be found, and they range from the least weasel which weighs about 25 grams and larger weasels which can weigh as much as 350 grams.

Weasels are nocturnal creatures who sleep during the day and are wide awake at night. To keep warm during winter, they curl up into a ball and lower their metabolism in their burrows.

Weasels don’t like to stay in groups,and often they fight a lot when in groups. Due to its aggressive nature, they are not usually kept as pets.

According to the IUCN's Red List of Threatened Species, weasels are now counted as least concern. In New Zealand, it is even considered as an invasive species endangering native wildlife.

What Is A Ferret?

Read Also: How to Bath and Clean a Ferret?

Ferrets possess a very good sense of sight, smell, and hearing. When they get scared, they tend to make some chattering or hissing noises. A ferret can be born with a wide range of fur colors, including black, black sable, sable, silver, albino, cinnamon, and chocolate.

They give off a certain musky odor due to the presence of some scent glands within them. Despite that, they are very popular as a pet,but there is controversy surrounding them. Although it is not legal in some states, according to the World Pet Association, it is known as the third most popular pet because of its inquisitive nature.

Now that we know what a weasel and a ferret are, it is time to study the differences between them. Here below, I have mentioned some of the key points that differentiate these two animals from one another.

The animal kingdom is divided into various subgroups known as a phylum. And the animals which have certain similar features are classified under a phylum which later is subdivided into class, order, and family according to the similarities that each of them shares.

Both the weasel and the ferret are the members of the Mustelidae scientific family due to their similar anatomical characteristics and behavioral pattern though they are of different species. Both of them are fearless meat-eaters,and they usually hunt small rodents.

Weasels comprise the majority of the Mustelidae family. They fall under the 10 species out of 17 species of this scientific family which covers almost 59% of the total number of species belonging to this family. For this reason, often the Mustelidae family is also known as the family of the weasels.

On the other hand, the exact origin of ferrets is confusing as fossil DNA was scarce. As a consequence, the experts failed to give precise information about the family tree of the ferrets. However, most of the sources state that ferrets belong to a subspecies within the polecat branch of the Mustelid family.

The weasel and the ferret both come in a variety of colors and patterns. They often show changes in color during seasonal variations. On the basis of this versatility, it can be easy to distinguish them by just observing their color of the fur.

Although both of them have thick fur, the key difference between a weasel and a ferret is their coat color.

Normally, weasels have red-brown or brown upper coat with an underbelly which is pure white in color. Interestingly, the tip of the tail of a weasel is often black in color. During winter, their fur changes color to white keeping the tail black as it is.

When we look at the texture, ferrets have more fuzzy fur compared to weasels. They have soft and velvet-like surface while weasels have more of a rough touch as their strands are thicker.

On the contrary, the ferret generally is found in 8 different colors. They are black, black sable, sable, albino, champagne, cinnamon or chocolate. However, they are commonly seen as a dark brown or black-brown coat mixed with white or cream. During winter they also change colors by darkening their fur.

Both a weasel and a ferret own a similar shape and form which is a long tubular body with short legs. However, weasels have shorter bodies and longer tails than ferrets. Even the snout of the weasel is longer compared to ferrets.

Ferrets can be very similar to cats when it comes to color patterns. Experts have counted up to 9 basic patterns. The common pattern includes a white patch around the neck, white feet up to its ankle and a solid color around one eye.

Meanwhile, weasels have no such color patterns,and they are smaller than ferrets. They appear to be a mixture of black or brown with white giving them a salt-pepper look.

Despite their different appearances, both can squeeze into small openings with their bodies and both tend to be very swift.

Besides, the difference in colors between the ferret and a weasel, they also differ in their sizes. Ferrets are relatively bigger and longer than weasels which makes it easier to draw a distinction between them.

Ferrets can grow as long as 24 inches starting from their nose to tail. On the other side, weasel can only grow up to 18 inches.

Even though ferrets are longer, weasels have a longer tail than ferrets. The tail of a weasel can be as long as their body, and that being said, their tail can grow up to 13 inches while that of a ferret grows only up to 5 inches.

The tail is the main distinctive point among these two animals.

Weasels and ferrets have something in common,and that is their food habits. They are both carnivorous that is they both feed on meat. Sometimes, their diet may also contain eggs of small birds.

Generally, they hunt and feed on small creatures like rats, mice, rabbits, possums, snakes and even birds. In addition, wild ferrets are bloodthirsty as they also drink the blood of their prey.

Weasels hunt during the day,but in the case of ferrets, they are nocturnal creatures that are precisely more crepuscular.

Weasels sometimes kill for sport,and it has been observed that their kills often remain untouched. They are so ferocious that they try to even attack animals larger than themselves.

On the other hand, the diet of a domesticated ferret is different from wild ones. They are regular fed homemade chow which consists of 40% protein, 26% fat and is lower in carbohydrates.

Not only do these creatures differ from their food habit but also from their hunting nature.

Weasels are sometimes called killing machines as they go for a kill even with their belly full. This bloodlust nature is instinctual as they have a fast metabolism which urges them to go for a kill drive.

The technique a weasel applies when they corner their prey is immobilizing by wrapping its body around the prey and biting the back of its head.

They even attack animals twice as bigger than them, so it is wise not to befriend them and keep them as a pet.

Ferrets that are in the wild spend their night by roaming around to catch their prey. They like to play with their prey first before eating by chasing them around. Ferrets love to hunt rabbits for which farmers use them for hunting rabbits.

Their natural habitat is different for each of them. Ferrets are uncommonly found in nature as they are domestic animals.

Meanwhile, weasels are commonly found in open fields, woodland, roadsides, and farmlands. They are abundant in places where small rodents are available.

On the contrary, ferrets are domestic animals. They are found to be a popular pet among farmers as they help to exterminate small rodents. Usually, they are kept in cages, but they roam around during the day outside of their cages.

Except for the black-footed ferrets, they live in the wild mostly in grassy areas by making burrows or living burrows of other animals.

These animals are adorable in size and appear to be very cuddly which gives you the urge to hold them when they come in sight. With that being said ferrets love the companionship of humans, compared to weasels. Weasels are however become hostile in the presence of human beings.

Ferrets have been kept as a common pet for over 2000 years in many countries as they do not pose a threat to the pet-owner. They possess a personality which is very entertaining and are natural mischief. They can even adjust their sleeping schedule to that of the owners.

On the contrary, weasels are solitary and aggressive animals. Therefore, they can seldom be tamed and of course difficult to keep as a pet. In some states, it is even illegal to keep them as pets.

Farmlands particularly where there is poultry or livestock, they are considered as pests. This is because these animals’ prey on poultry animals and steal their eggs causing a nuisance.

Both the weasel and the ferret are mammals which means they obviously give birth to babies and care for their own offspring. Their offspring are often called kits. However, the number of kits, the duration of gestation and sexual maturity are not similar to one another.

According to ADW, weasels can give birth to 1 to 2 litters which contain 5 to 6 babies every year meanwhile ferrets give birth to one to six kits after a period of 35 to 45 days.

Usually, kits of ferret live with their mother in the burrow before attaining maturity. Then, the young ferrets tend to be independent and live on its own after a year of its mother care.

On the flip side, the young weasels stay longer with their mother and even go on hunting expedition with them. They learn to hunt at the tender age of 5-6 weeks old.

Nevertheless, the life span of both the animal’s range between 10 to 12 years.

Now that you have come to know the differences between these two creatures, you can identify which has been lost from the wild and which has escaped its owner. Keep in mind that animals belonging to the same species are not always alike in nature.